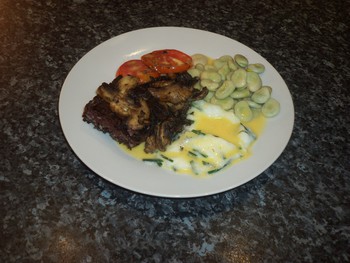 We love our veg box. We get one each week from Riverford Organic Farmers and we love it. We really do. It's full of seasonal, organic produce, and each week we get whatever they've got ready to go. Which is awesome.

It does mean that sometimes we end up having to think of interesting things to do with Yet Another Batch of Whatever. I'm not really complaining about this. It stretches me as a cook to figure out Something Else To Do With Carrots - just as an example.

In this case, it was Something Else To Do With Broad Beans. We'd used them in a variety of ways leading up to this meal, and while, those ways were good, I was looking for something else to do with them. Thinking beans led to baked beans which led to, well, this ...

Not Really an English Breakfast


You can, of course, buy your black pudding from your local butcher or grocer. On the other hand, it's easy to make, and you can tweak the flavour and texture to your own desires. The hardest part is sourcing the blood, but, in this day and age, dried pig's blood is not hard to find. If you make charcuterie (and you should), your charcuterie equipment/ingredient supplier probably stocks it. This is my version, and we like it very much.
Put the barley and oats in a bowl, cover them with a generous amount of water to soak. Keep an eye on them, if they absorb all the water, add some more. Give it a while, an hour at least, more won't hurt it.

Drain the grains, saving the liquid. Measure 350 ml of the soaking liquid, topping up with more water if needed. Put the blood into a bowl with the spices and salt and add a little of the liquid, stirring until smooth. Continue adding the liquid in smallish glugs and mixing. (This is not absolutely necessary, of course, it's just that if you add the water all at once, it tends to clump, and you have to spend more time mixing or whisking to get it all smooth. Ask me how I know.)

Then add the onion, grains, and bacon. Mix it all together and pour it into a dish. Mine is sized so that this fills it to a depth of about 2cm, if yours is thicker or thinner, you may need to adjust your cooking times. The pudding will tend to stick, so greasing your dish, or lining it with foil may be a good idea. (It is also worth noting, that at this stage you could put the mix into casings instead, if you are so inclined.) Put the pudding dish in a waterbath which comes up at least to the traditional half-way point, and bake it in a 165C oven for an hour and a half.

It will hold together better if you let it cool and then either eat it cold, or reheat it it some fashion. For this meal, I fried it it with the mushrooms and tomatoes.

The veg box often includes tomatoes or mushrooms or both, which also contributed to the idea for this meal. I think we only had one of these in the box and had to buy the other elsewhere, but I honestly don't recall. In either case, the procedure is simplicity itself.

Slice the mushrooms and the tomatoes. (As I have suggested elsewhere, use a serrated knife for the tomatoes. Trust me.) Heat a skillet with some olive oil. Put the shrooms in first, with just a pinch of salt. If you are going to fry the black pudding, it can go in at this point as well. We don't like the tomatoes too soft, so I put them in after the others have been going for a few minutes, but if you like them more cooked, then put them in now, as well.

When they are done to your liking, take them out.

If they are in the pods, remove them. Bring a pot of water to the boil, then boil the beans to your preferred level of softness. If they are fresh, it shouldn't be more than a few minutes in any case. Drain them.
Part 5: The Savoury Meringue

I have done savoury meringues before, and I think that they are great fun. People are so used to the idea of sweet meringues that they can be taken aback by the idea of a savoury one, even though fried eggs, omelettes, and so forth don't strike them as odd. I have also had reasonably good success over the years with poached meringues. There's a dessert called 'Floating Islands' which I've made on several occasions, for example.

I said above that there would be more about the poached meringues. Well, here it is - they can be a little tricky. The meringues in the pictures have collapsed. They were poofy and perfect and I turned away for a moment to do something else, and when I turned back they had collapsed. So, keep an eye on them, and pull them out of the water as soon as they are done. They're still perfectly edible and delicious, of course, just not as pretty.

Bring a large pot of water to a gentle simmer. Beat the egg whites and the salt until they form stiff peaks. Cut the herbs, if you're using any, small and fold them gently into the egg whites. Dollop the meringue mixture gently into water in whatever size dollops you like. Don't crowd them in the pot. Poach for a short while, a minute or two depending on size, then turn them over for another minute or two. Remove with a slotted spoon once they've set.
Part 6: The Hollandaise
The nice thing about doing the meringues is that you have leftover egg yolks for Hollandaise. Or, in my case, I knew I wanted Hollandaise and decided the meringues would be a nice change from just frying or scrambling the leftover whites. Get a double boiler going on the stovetop. I don't have a specialized one, I just fill my second smallest saucepan with water and set my smallest saucepan in it. Put the egg yolks in along with the lemon juice and whisk thoroughly together. Add the salt and cayenne, whisk them in. Add the butter, and continue to whisk gently. When the butter has melted, you can serve it. If you are feeling bold, continue to whisk gently for a while longer, and the sauce will thicken. If you heat it too much, it will set and you will no longer have a thick sauce, but rather thinnish hard-cooked egg yolk. It will still be delicious, but it won't pour as well. Practice makes perfect with this, and I personally consider it a triumph when I get the texture just right. I have been known to draw my wife's attention to the sauce in such cases, so that she may admire it appropriately.

Assemble and serve. It made a lovely dinner.

© 2021 Jeff Berry html on this site has been lovingly crafted by hand. You just don't get craftsmanship like this anymore, in this age of mass-produced, pre-fab websites.
Now virtually co-located on panix.com, as of 11 Jan 2011