For the talk by Marc Meltonville on June 16, hosted by the Culinary Historians of New York, my job was to come up with some recipes from the Tudor and Georgian eras that members could bring to the event. Last week, I went all Georgian with Asparagus Stuffed French Rolls. This week, it's late medieval, late fifteenth century in fact, from manuscripts edited by Thomas Austin. Pies were a common feature of medieval cookery, and this one looked both delicious and also fairly typical.

Herbe-blade
Take buttes of Porke, and smyte hem in peces, and set hit on the fire, and seth it in faire water ; And whan hit is soden y-nogh, tak it oute, and baude hit, and pike oute þe bones, and hewe it small, and putte hit in a faire boll. And take Isop, Sauge, and parcelly a goode quantite; pike hit, and hewe hit small, And put hit in faire vessellez, And take a litul of þe broth þat þe porke was soden yn, and drawe hit þorgh a streynour, and caste to the erbeblade, and yef it a boyle; then take oute þe herbes with e Skymour fro the broth, And cast hem into þe porke in þe bolle; And then myce faire dates small, And caste hem into there-to, And reysons of caoraunce, and pynes; And draw rawe yolkes of egges thorgh a straynour, and caste thereto Sugar, powder of Ginger, salt; colour hit with a litull saffron; And trull hit with thi honde, al this togidure in þe bolle ; And þen make faire rownde cofyns, and put hem in the oven, and hard hem a litull, and take hem oute ayen, and with a dissh in thi honde, fil hem full of the stuffe, and sette hem ayen in the oven al open, And let hem bake ynowe. And thenne serve hit forth. 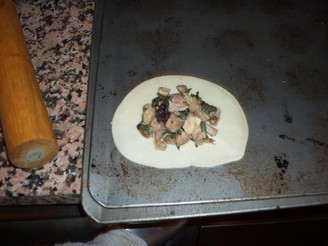 Herbe-Blade Meat Pies
Put your pork in a pot and just barely cover it with water. Bring to a boil and simmer until just done. If you are using shoulder chops this should be perhaps ten minutes, if using larger pieces it will take longer. Remove from the cooking liquid and let cool.

Put your herbs into a pot and just cover with the cooking liquid. Bring to a boil, and simmer for five minutes or so. Drain the herbs.

Bone the meat, cut into small pieces and put into a mixing bowl. Add the herbs, dates, currants and pine-nuts. Add the salt, sugar, ginger and optionally saffron. Lightly beat the egg yolks, add to bowl and mix well to combine.

Concerning Pastry This recipe is for an open pie in a pastry coffin, so you can make (or buy) pie shells in your usual fashion, pre-bake them, then fill them and bake for another 20 or 30 minutes. This will require cutting and serving in pieces, and may be a little mess, especially if you are serving them as hors-d'oeuvres, as CHNY will be doing. 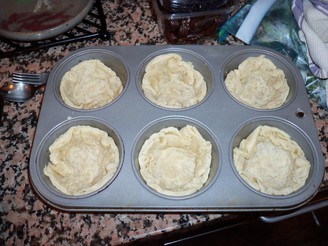 Alternatively, take your crust and make smaller open pies in muffin tins or something similar, again blind-baking first. Regular pie crust is good, but puff-pastry is also possible for this sort of thing. This is one of the options I chose.

Closed pies were also common, and for an hors-d'oeuvre pie, may be tidier. Take your pie-crust (or empanada wrappers), fill them, fold and seal and bake for 20-30 minutes. If you'd like, you could give these an egg-wash, but I usually don't. This is the other option I used for this pie.