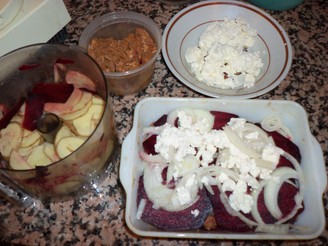 As previously mentioned, I make a lot of gratins in the winter. A gratin is a versatile way to use root vegetables, dairy and whatever else you have to hand. Sometimes, though, it pays to plan a little bit further ahead and make a special purpose gratin. Given my love of sausage and of Mexican/Tex-Mex food, it was probably inevitable that someday they would collide in some way. I could try to make a case that hearty peasant food is similar across many cultures and so the idea of gratin with chorizo isn't that weird, but I won't. Instead, I'll simply say this: cheese, sausage and starch - how bad could it be?

Slice the onion, potatoes and beet fairly thinly. In your gratin dish, build up your layers in almost any way that suits you. For this gratin I layered my ingredients this way, building up from the bottom: potato, sausage, beet, onion, cheese, sausage, potato, cheese. I like putting cheese on top, since it holds the whole thing together as it melts. The reason I have a layer of sausage just underneath the top layer of root veg is so that as it cooks, the sausagey goodness will work down through the other layers.

Once built, pop it into a 350F oven and bake for an hour. Test the gratin by poking it with a knife - if the knife goes easily through the vegetables, it's done, if it doesn't, pop it back in the oven for another ten minutes.

The basic method for sausage is here, the only real changes are in the spice mixture and the liquid. For this sausage I use: 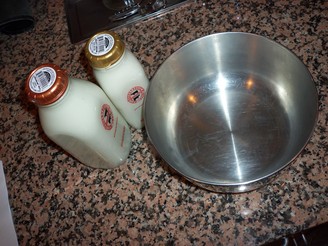 Fresh Cheese Mix all the ingredients together in a clean bowl. Cover with a clean cloth and leave in a safe place at room temperature for eight hours or over night while the curd forms.

Line a colander with cheesecloth and move the curd into the cloth. For this sort of fresh cheese, I usually just pour the curd gently into the colander. Then you will need to hang it for at least a few hours - eight is not too many and overnight is certainly acceptable. If you don't have a cat, then finding a place to hang it may not be a problem. I do have a cat, but the solution I've found works even for those who don't. I put one oven rack in the top slot of my oven and another in the bottom slot. I remove the rest. Then I can hang the curd from the top rack over a bowl on the bottom rack. 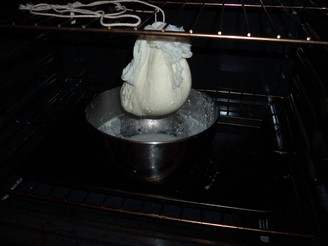 Then simply untie your cheesecloth and scrape the cheese into a bowl. If you aren't going to use it for the gratin, you can add a little salt or herbs or both and spread it on bread or what have you.

Now, on the subject of whey ... when I make cheese, I keep the whey and use it to start the next batch of cheese. (And also to make bread, in soups and the list goes on and on.) If you don't have whey, or a cheesemaking friend who can give you some whey, you have a couple of choices. First, of course, you can become a cheesemaker. Alternatively, you might be able to get a decent result by using some buttermilk. Make sure it's cultured buttermilk and try a quarter cup. I have not tried this, but there are quite a few sites out there that say you can make this work. Caveat emptor ...