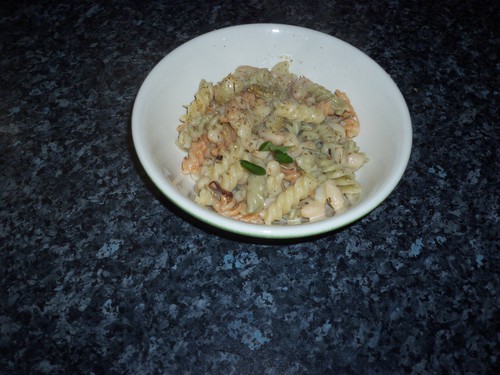 So here we are in quarantine. If your grocery stores are like mine, and many are, shelves are still empty after the initial rush of panic buying and hoarding. Based on a close analysis (which is to say, casual observation at my local Morrisons), pasta, flour, canned and dried beans, toilet roll, and hand-sanitizer are the most popular items to buy in ludicrous quantities, with tonic water and cream crackers having a short-lived grip on the public mind, like some sort of pandemic pop-star's one-hit wonder.

Clearly, then, everyone must be eating dishes which feature those ingredients prominently. Pasta with beans is pretty straightforward, but flour ... what are people doing with the flour? Making more pasta? Pasta and dumplings? Pasta butties? (I mean, chip butties are a thing, right?)

No, pasta requires a sauce. Well, requires is probably a strong word to use. Pasta is good with a sauce. I like flour-thickened sauces, and béchamel is a fun word to say and a fun sauce to make.

So, Pasta with Cannellini Beans in Béchamel Sauce! Presumably, you serve it with tonic water and use toilet roll instead of napkins.

If you are using dried beans, cook them thoroughly before you start on the rest, since they take far longer than anything else. I either let them go all day in the slow cooker, or, as in this case, give them about thirty minutes in the pressure cooker.

Start your pasta water going, and get some olive oil heating in a skillet. If you are using an onion, cut it fairly small. If using fresh garlic mince it. I used a single onion. Put the onion/and or garlic bits into the olive oil and let them begin to soften. We recently cut our rosemary back, so I have a lot of rosemary to hand, and I added some to this as well.

Chuck the pasta in to the water.

On to the béchamel. Sprinkle a spoonful of flour, or more if you want a lot of sauce, onto the oil and whatever else is in there. Stir it around and make sure there isn't any flour visible, it should all be mixed with the oil into a thick paste-ish substance. We are making a roux here ... cook the roux for a little bit, stirring pretty constantly. You can do this for as long as you want, really; the longer you cook it, the darker the final sauce will be. For this, I'd recommend only a minute or two, to cook the rawness out of the flour.

Then add your liquid. Milk is the classic for béchamel, but I'm open-minded. Dairy is nice, but for this recipe, even that isn't required. I used some cream and some whey - I usually have whey to hand from cheese-making. Add about a cup and stir it in well. If your roux has been mixed and cooked properly, you shouldn't get lumps or need to whisk. (Although if you have a whisk and like whisking, by all means, whisk away! And if you have whisky and like whisky, whisky away! That's good,too.) Now you will have to use your judgement. As the liquid heats, the sauce thickens. If it is too thick, add more liquid. I was a little heavy-handed with the flour, and needed to add liquid. I just poured in some of the pasta water. Taste the sauce. It's carrying most of the flavour, so it can be reasonably aggressive. Add salt to taste. Add whatever else you like, too. I had more sauce than I had planned on, so I added some garlic powder as well as salt. Pepper we added at table.

When the pasta is done, drain it. Add the beans (likewise drained), and the sauce. Mix. Put into bowls. Garnish as desired. I added dried oregano and a bit of fresh marjoram from the garden. I didn't use any cheese, the béchamel is pretty rich on its own.

Variations:
You could easily add more vegetables to this by either cooking them separately and stirring them in, or by blanching them in with the pasta. Broccoli would be good tossed in with the pasta after a few minutes, for instance.