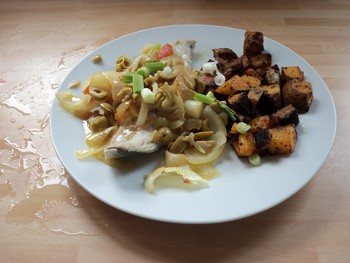 This is a simple recipe. It is not, however, a fire-and-forget recipe. It's more of a wire-guided recipe. Or is that stretching the metaphor? It's not complicated, but it does require some sort of oversight and the occasional tweak or adjustment. Still, it's awfully good.

For some reason, I think of this as a Portuguese style recipe, but I have no real basis for that, so take it for what it's worth. The potatoes are in the style of the Spanish Patatas Bravas, but, again, only sort of, and are not, strictly speaking, required for the dish. However, they go very well with the fish, and tie the whole thing together. So give it a try, trust me.

Fish choice will have a huge impact on the result, of course. I use mackerel, but you could probably get away with another sturdy fish; anything too delicate will just fall apart during the cooking process, and, while it might taste good, the effect will be not quite what we're looking for here.

For the Mackerel Begin by cutting the potatoes into dice and tossing them lightly with olive oil to coat. Sprinkle them with salt, pepper, and paprika in whatever proportions seem right to you. Put them in a heavy pan over fairly low heat, and keep an eye on them, stirring them when the spirit moves you.

Cut your onions into demi-rings, and put them in a saucepan with a bit of olive oil and salt to soften. Cut the tomato into smallish pieces and chop some olives - perhaps half-a-dozen. When the onions have started to soften, add the tomatoes and olives.

Chop some more olives, as well as the scallion. Now for the tricky part. As the sauce gently cooks and the flavours start to come together, go back to the potatoes; the timing depends on them. Play with the heat, maybe cover them for a bit - maybe not. Mess about with them until they are nearly done - if possible kick the heat up toward the end and don't stir so they get a bit of crisp on them.

Then push the sauce to the edges of the saucepan, put the mackerel in the hole, skin-side down, and perhaps touch it with a bit of salt. Spoon the sauce back on top, cover the saucepan, and let it simmer. It should take about eight or ten minutes. Keep an eye on it.

If everything works out, the fish and potatoes will be done at the same time. The best part is that as long as your fish is relatively sturdy, you can be off by a few minutes on either dish without messing them up.

Put the fillets on a plate next to the potatoes, garnish with the scallion and the chopped olives and serve.