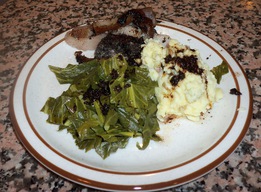 The weekend after Lent, we celebrated in the traditional fashion. That is to say, we added butter and/or cheese to everything for which it was even faintly appropriate. And, of course, we made something with meat.

I've still got venison in the freezer, including a nice big piece of loin. Loin can be tricky, especially when it's as lean as venison tends to be. One can always give it a quick sear and sauce it, as with a Stroganoff, or braise it or do something else in a moist-cooking vein. However, that wasn't speaking to me. I wanted ... I wasn't sure, but not that.

If I was going to roast the loin, and I was leaning that way, I wanted to make sure it didn't dry out. Usually that means larding it. That's when it struck me! I had a couple of sheets of what my pork-merchant calls "pork skin," and describes it as "Fat back that lacks a lot of fat."

From there the rest of the pieces fell into place. My concept was to work en papillote, using pig skin instead of parchment paper, but that would have required an even larger piece of pig-skin. So I settled for a simple roll. After I prepared the seasoning to go inside with the loin, my wife pointed out that it resembled a Beef Wellington paste. 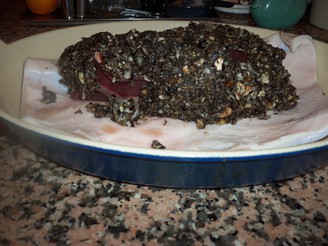 So here is the result. Neither en papillote, nor Wellington exactly, it's lean venison loin lovingly wrapped in pigskin and roasted until delicious.

The night before, make your brine and put your pork skin into it. Leave it sit in the fridge overnight and on into the day until you need it.

Prepare the seasoning paste by running the onion, garlic, mushroom and the 1 Tbs of salt through the food processor, pulsing until smoothish.

Venison assemble! Lay your pork skin down and apply a bit of paste down the middle. Put the loin on top of that. Pack the rest of the paste around it. Roll it up fairly tightly and place it seam-side down in a roasting dish. Pop it into a 350F oven for around an hour and half. Then, if you like, crank the heat up to 375F and give it another fifteen minutes, just to crisp the skin some more. That should give you a roast with just a faint touch of pink in the middle. If you prefer your meat either less or more well-done, adjust accordingly. The trade-off, you will find, is in the crispness of the skin. The roast should stay moist, though, due to the fat in the skin.

Let the beast rest for ten minutes or so. While it does, deglaze the pan with a bit of red wine and then reduce to make a sauce. When you cut, try a serrated knife. If the pork skin is crispy, a regular knife may not give you a clean cut. (It certainly didn't when I tried ...)

Of course, if you don't have venison loin, you could use something else. Pork loin would be my first suggestion. Likewise, if you can't find a big slab of pork skin, you might be able to find a piece of pork belly, fatback or slab bacon that you could peel the rind off of. If it's bacon rind, you probably shouldn't brine it. You could even patch together several pieces to get the coverage you want. Strips of fatty bacon might do in a pinch, although it will be harder to keep the mushroom mixture together. 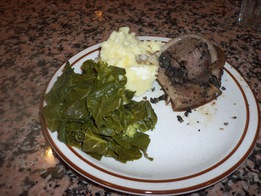